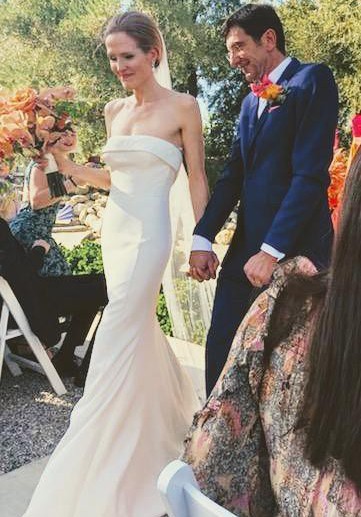 This dress is a classic — clean lines, elegant, a dream to wear. Drops in the back to show lace detail.

I had it professionally cleaned and have posted photos (last three pix in my lineup) of the dress back from the cleaners. There are a couple small spots (zoomed in on those in the last two photos) that the cleaner wouldn't take out, as he said it would bleach the fabric around the spots and thus draw more attention to those areas. There is also some slight and limited darkening and fraying along the back bottom hem, where the train was on the ground; I’ll swap out one of my current photos to show that as soon as I can. If you are shorter than 5’10”, you’ll likely be taking up the hem as it is; I left it a bit on the long side for my height because of my heels.

This dress is a real show-stopper; I was looking for a cape to go with it initially but ended up wearing it solo. Just a knockout!

It was an 8 originally but I had it taken in to fit a size 6; you can see the places where it was taken in based on the fitting photos above. Added a bustle (see photo with full back view). Note: The measurement of the hip region at its widest section is 17.5” across; I have somewhat narrow hips compared to my shoulders. I’ll post altered measurements of bust, waist and length, but that’s the part of the dress that is most specific to my build. That said, as I recall, the tailor told me that she had reconfigured it to be a solid size 6 once the alterations were made, to give you a sense of the overall fit.

Kasia is selling this dress at the lowest price on Stillwhite.

Kasia is selling this dress exclusively on Stillwhite, so you won't find it anywhere else.

Once you send a message, Kasia can invite you to purchase the dress.