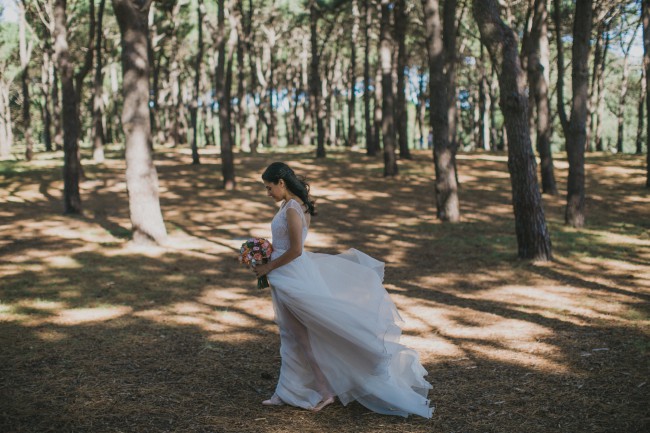 The silk charmeuse lined nude bustier creates a flawless base for the stunning hand beaded Italian lacework, which is intricate and impeccably detailed. The skirt is overlaid by flowing silk organza panels of off-white and oyster to create tonal layers, which simply float down from the detachable silk ribbon at the waist.

Paul Vasileff, the beauty and brains behind the Paolo Sebastian label, is an Adelaide based designer and has become a celebrity favourite in recent times. Paolo Sebastian designs have been worn to the Academy Awards, Daytime Emmy Awards, Grammy Awards and the Logie Awards. His most recent accomplishment is being named Young Australian of the year in 2017 for his work in founding and running Paolo Sebastian as well as being awarded the Best Australian Evening Wear Designer in the 2017 Prix De Marie Claire Awards.

Vasileff has built a following both locally and overseas including celebrity clients and stockists worldwide. His elegant gowns, sometimes richly embellished, and almost all occasion pieces, have been worn by Kris Jenner, Giuliana Rancic and, in a recent Vogue Australia shoot, by Kim Kardashian

This particular dress was custom designed and made by Paolo Sebastian. I travelled Adelaide to collect it from Paul in early 2014.
The dress has been made for a busty (90cm bust) small frame (AU size 8-10) and height of 163cm (plus 10cm heels).

Available to try on and pick up in inner-west Sydney. Postage (registered only)/courier at buyer’s own expense.

It has been worn once on my wedding day. To ensure it is in the best condition it has been dry cleaned and boxed. 1mm of the edge of each organza panel has been meticulously trimmed and re-edged so you receive an absolutely fresh hem.

Once you send a message, Claudia can invite you to purchase the dress.