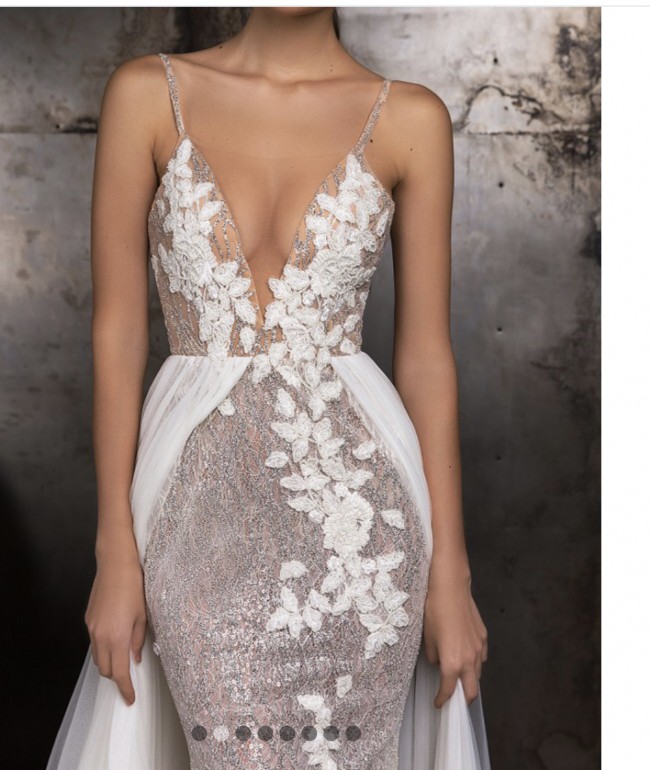 I bought this dress off another bride on Stillwhite 2 years ago but unfortunately I have had to postpone my wedding twice
Now and going for a more low-key and relaxed wedding. This is one of the most beautiful dresses Iv ever tried on it’s so sparkly and would have been absolutely perfect for my wedding in santorini. The dress is so similar to berta styles which is the reason I chose it!

I have copied the paragraph and alterations the previous bride had listed. The dress has been stored in a dress bag so will need steamed.

I have more up close photos I can send :)

previous bride was 5ft 4 with shoes on

The Dress
I'm selling my beautiful wedding dress from the Crystal Design Haute Couture Timeless collection 2018. I chose this dress for my wedding because the fabrics used are the same as Berta, the craftsmanship is very high-level but the price is much more bearable :)
The dress is a fit and flare overlayed with double tulle so it looks more like an A-line. The overskirt is not detachable and is asymmetric at the front, revealing the intricate embroidery.

See it in motion here: https://www.instagram.com/p/Bss2QfGnzYx/?utm_source=ig_share_sheet&igshid=13mw47vdj15wv

For the first dance I pinned the lower layers at the back and tugged the tulle overskirts at the back of the dress - it was very comfortable for the choreography and didn't look bad either.
The dress is worn just for several hours, as I changed into a short dress after dinner. The dress was professionally dry cleaned and kept in a garment cover since. I lost the brand cover at the wedding but I'll send it in another long one.
The dress is both elegant and sexy. I felt very beautiful and comfortable wearing it and I'm happy to pass it on to another bride for her dream wedding day!

I had the bust cups removed but the dress is shapely and opaque without. I had a second layer of transparent beige tulle added to the bust area for more coverage and "blurred" effect but you can easily remove it. The dress was customized when I ordered it, the front was too glittery in real life, so I had the top glitter layer trimmed at above knee length (see my wedding photos), revealing the lace layer underneath. The two layers are faded seamlessly around the embroidery and the dress became lighter and less warming (I had a July wedding so that was important). At the back the whole glittery layer remains. Also the train was too long and moved like a ball of fabric so I had it shortened, but it's still longer than the front and trails behind the dress beautifully.

Will include a short veil

Once you send a message, Natalee can invite you to purchase the dress.