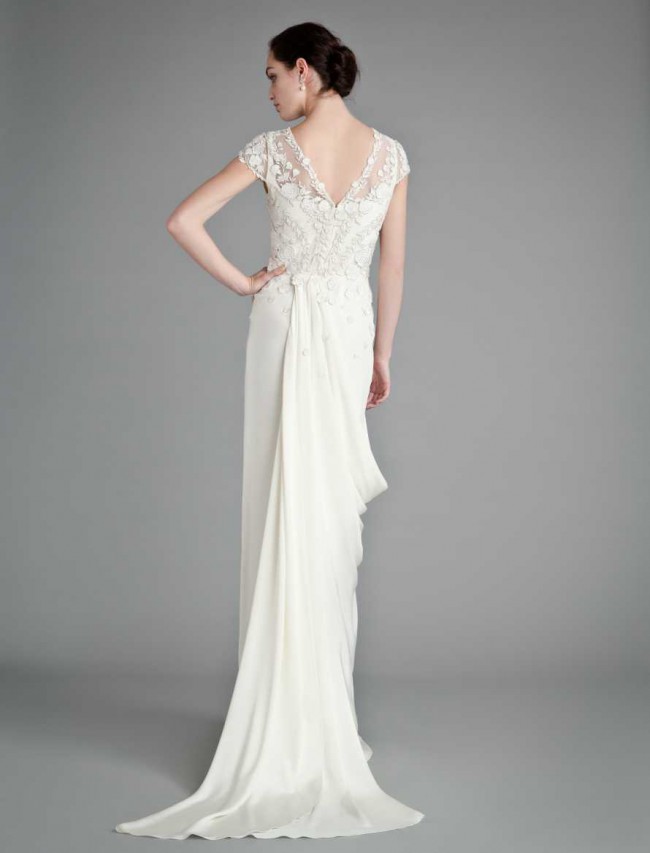 Description: Floral embroidery enhances the exquisite presence of this silk gown from Temperley London. A draped sash wraps around the skirt and sweeps to the floor in a graceful train. A mesh illusion neckline and dainty cap sleeves add delicate elements to the intricate design. The dress is fully lined with a hidden back zip, so no fiddly buttons! A dancing loop for your finger and a bustle loop at the front have been added for convenience. I am 5ft 6inches tall, size 10 and I wore the dress with heels approx 3 inches, so it would be suitable for someone of up to 5ft 9inches depending on their shoes. The dress has been dry cleaned and is in pristine condition, no marks, holes or flaws.

Temperley samples only come in size 8 or size 12 so this is a great opportunity to get a designer dress for less than designer cost!

Temperley Bridal, with two collections a year, is epitomized by ethereal, timeless silhouettes inspired by the romance and decadence of a bygone era. Inspired by old school Hollywood glamour and film noir icons drawing on a rich heritage to create the ultimate fantasy dress for a bride. Alice Temperley MBE is a British fashion designer based in London. Her fashion label, Temperley London was launched in 2000. In 2006, The Guardian noted that she had been described by American Vogue as the designer making the biggest waves in British fashion. More recently, she has been described as the "English Ralph Lauren"

Once you send a message, Jezebel can invite you to purchase the dress.