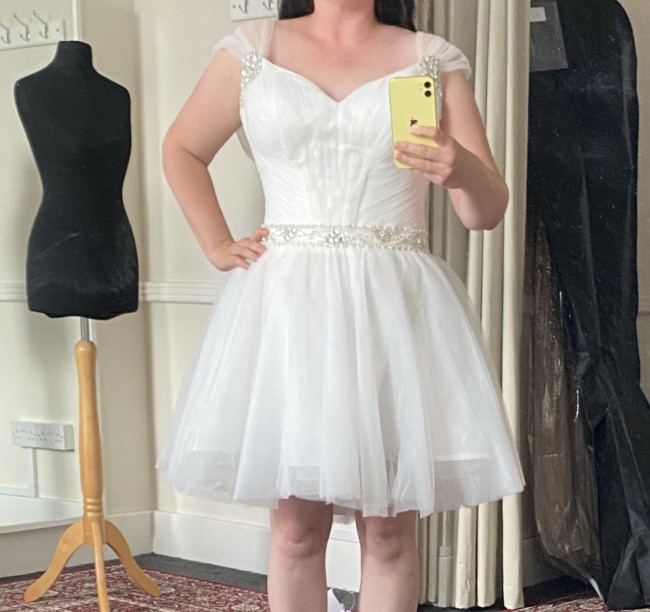 My original April wedding was cancelled due to Covid, then rescheduled to next year, then we were told we could go ahead in July (with a week’s notice), so my mum and I bought this dress at the last minute (my original dress was in storage) about 5 days before the ceremony!
It’s a size XL on the label, but I’m a size 14 and it was just about right. Could probably get away if you are a large 12 as it has a corset back.
It was a definite impulse buy and I was never sure it was me, so I chose not wear it in the end. It’s a bit too ‘Disney’ for me, so I went with something plain (and short).
The idea was something fun, and feminine, but also a party dress! I did have fun trying it on in the shop, but like I said, I think it was a panic buy!
I had it altered (1. cut short and 2. removed the bling straps/ replaced with tulle straps).
The dress was £550 (receipt available) plus alterations.

I’m only 5’4” in height and it comes just above/ on my knees. It looks awesome with killer heels (like a Disney pixie or fairy!), or you could punk it up a bit (which was my idea!) with a pair of boots!

If I was to recommend alterations (if I had time, I would’ve done this, but I only had a few days), I would reduce the top/ neckline to remove the bling and so it was less ‘pointy’ (not sure that’s the right word) and more fitted to the boobs! However, the crystal type detail that would be cut off to do this is also quite cool, so it’s up to you! The pointy tops also nicely hide arm cleavage! Haha!

Finally, there is a tiny bit of beading missing, at the back. I think it was like this when I bought it, and I didn’t notice until the lady doing the alterations lady mentioned it (photo included).

All the photos are me!
Jacket/ veil from the photos not included in the sale.
I can’t find the name of the dress, but it’s Lenovia on the label.

1. Cut short. A strip of ‘horsehair’ tulle has been added to the underneath layer to make it stick out a bit more!
2. Bling straps were removed and replaced with tulle ones. Could easily be removed again.

Claire is selling this dress at the lowest price on Stillwhite.

Once you send a message, Claire can invite you to purchase the dress.