I had an inside stitch added to the arms as they were too loose which made the dress droop in spots it should've been fitted. It was also hemmed because it was pretty long when purchased. 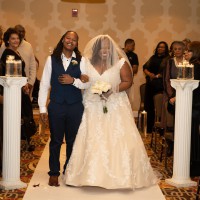 LaTasha is selling this dress exclusively on Stillwhite, so you won't find it anywhere else.

LaTasha is selling this dress at the lowest price on Stillwhite.

Once you send a message, LaTasha can invite you to purchase the dress.