Made With Love, Harlie, Size 8

Made With Love
Harlie

Made with Love Harlie size XXS in Ivory with no split.
Worn once in March and has been dry cleaned.
Gown Bag Included.
No Split in dress and no alterations to the length have been made.
The dress is already altered with a bustle to put up later in the day and the straps were slightly altered to bring up and to allow for a small bust.

Taken in a little around the bust, also put a bustle in so you can tie the train up later. 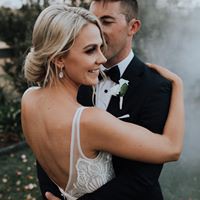 Made With Love, Harlie, Size 8

Once you send a message, Caitlin can invite you to purchase the dress.